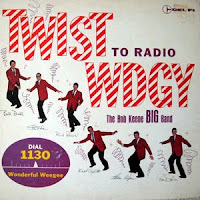 In 1961, clarinetist and Ritchie Valens discoverer/producer/manager Bob Keene was looking for a promotional opportunity for his record label, Del Fi. A year earlier, Chubby Checker had rocketed up the charts with an infectious dance number, “The Twist,” so Keene, the one time bandleader, decided to capitalize on the trend—and produce a record of popular dance songs of the era, performed by his own Bob Keene Big Band.

But how could a big band leader get any airplay on rock and roll stations? To sell the concept Keene would call the LP Twist to Radio. He pitched the idea directly to local stations as a "local album" featuring not only the participating station's disc jockeys on the album cover--but also Keene's music.

“I can’t remember why it was ever put out,” said Tom Wynn, who was one of the six disc jockeys pictured (second from the right) on the Minneapolis Twist to Radio WDGY album .

Disc jockeys posed on the cover of the album “twisting” in matching jackets. Their signatures and station logo adorn the LP.

“I do recall posing for the picture in the basement of WDGY many years ago,” Wynn said. “We didn't have any twist instruction on how to pose—you could probably tell that by looking at the LP cover.”

In 1961 WDGY’s (known by its nickname Weegee) Top 40 format was competing with pop powerhouse KDWB, who had dominated the Minnesota airwaves. While KDWB featured live jocks, WDGY was 100-percent automated. Wynn, who was the station’s midday announcer, would record his entire show on tape, which was played back on a Schaefer system, consisting of six large 10-inch reels. The time and temperature were inserted into cart machines at specific times. “We were hardly a threat to KDWB,” he admitted, however the Twist to Radio album was probably released in an attempt to boost ratings. “It's one of those really dumb things we did before our demise.”

“I do recall recording the show one late night, when who walked in with his new bride—the one and only Todd Storz himself—first and only time I saw the man,” he admitted. Storz is credited with the Top 40 radio format. At one time he owned not only WDGY, but also WTIX, WHB, KXOK (AM) in St. Louis, WQAM in Miami, and KOMA in Oklahoma City. He died of a stroke in 1964 at the age of 39.

Wynn would leave WDGY in 1962, for a job across town at KRSI. He would later move to WEBC in Duluth, before heading west to Fargo, North Dakota and news talker, KFGO. He just celebrated his 30th year at the station as morning show host, with Larry Ristvedt.

Posted by Lisa Wheeler at 5:16 PM No comments: