It's amazing what you find when you clean out boxes you haven't gone through in decades. While not vinyl related, allow me the first post of the new year to share a fond personal radio memory of my past.

In 1974 I was 13-years old, living in Fort Worth, dreaming of marrying Rod Stewart. Every night I would go to bed with a transistor radio under my pillow, listening to John Records Landecker's "Boogie Check" on a weak signal all the way from WLS-AM in Chicago—what seemed like a world away.

While my William Monnig Middle School friends wanted to become teachers or actresses, I wanted to be in radio.

My favorite local radio station was KFJZ-AM. My best friend Tracey and I were dedicated listeners. We knew every song on the weekly hit list, and probably attempted to win every single call-in contest they ran. On one particular afternoon, after hearing the seemingly constant sound of a busy signal, I was "lucky caller number five," and picked up The Sweet’s Desolation Boulevard album. I’ll never forget it when Christopher Haze, the 3-6:00 p.m. jock, told me to stand by, because he was actually putting me on the radio. I nearly froze when he asked me what my favorite station was – but there I said it, in my best Metroplex twang, for all of Dallas/Fort Worth to hear – “K-F-J-Z!” 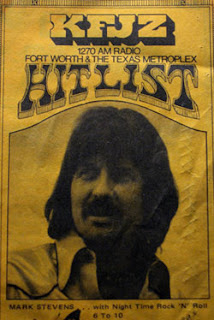 Everyone at Monnig religiously listened to Mark Stevens. He had the coveted 6-10 p.m., shift, and was considered Fort Worth radio royalty. His daughter, Kimmie, was in my class, and by default, was easily the coolest girl in school, due to the parental celebrity factor.

The Mark Stevens show featured sidekick favorite, Biff Burns. In between Chicago, Paul McCartney and Grand Funk, the two would banter back and forth - Mark playing the straight man, to Biff’s bumbling goof, with the perfect punch line at the end of every bit.

(Recording made by holding my Sears portable recorder
condenser mic, up to my transistor radio)

After Mark Stevens wrapped up, L. (Larry) Shannon would take over the airwaves. Call it junior high naiveté, but it never dawned on me, until probably 20 years later, that Biff Burns was actually Shannon. I guess that was the wonderful thing about radio back then.

One night I called Larry Shannon to request a song (probably “Life is a Rock”). He said he would play it, and then, instead of hanging up, he asked what my name was and where I went to school. I told him, and then he literally opened the door – he asked what I wanted to be when I got out of school. You know that scene in “A Christmas Story” when Ralphie’s mom asks him what he wants for Christmas? Yeah, it was like that – a golden opportunity. I told him I wanted to be in radio.

“Hang on a second, let me get into this next record,” he said.

For the next 30 minutes, through segued songs, weather forecasts, and commercial breaks, we talked about radio. The conversation, in between the “stay in school” message, hit the highs and the lows of life as a disc jockey. “You’re going to have to work a lot of overnight shifts in this business, but it’s worth it to get your foot in the door,” he said. I absorbed every sentence. I would call him again, a couple of months later, to tell him that I was moving to Oklahoma, and that I wouldn’t forget him taking the time to talk to me that night.

Five years later I got my first gig – changing out reel-to-reel tapes at a “beautiful music” station, in Pueblo, Colorado. Yes, it was the overnight shift – but I had my foot in the door.
Posted by Lisa Wheeler at 8:00 AM 1 comment: