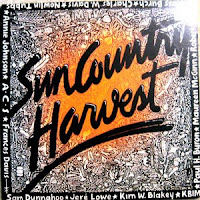 Side One:
Hagerman My Island - Sam Dunnahoo
Fill My Soul with your Magic - Annie Johnson
You Made Me Love You - Paul H. Byron
Southwest Friends Old and New - Robert Miner
Roswell Incident Rap - Russ Burch

(AUTHOR'S NOTE: OK, let’s get this out of the way - technically this is a television station release. I tend to have blinders on when it comes to these albums. If it has “K” or “W” call letters on them, I buy them. Also, yes this is my second blog entry, about a New Mexico album, in three months. I send out dozens of e-mails, to the jocks and artists who appear on these comps, and then I wait…and wait. Thankfully I received a reply from a jazz musician out of Albuquerque, who appears on one of my newest acquisitions, KBIM - Sun Country Harvest.)

In the late 1980s, saxophonist Bob Miner was playing in the local Roswell-Carlsbad area band, Cielo. He was finding steady work playing weddings and special events at churches and at Lucy’s in Carlsbad, and out in Artesia. “When in Rome, play Roman polkas and cumbias,” he admitted. “I had a delightful time, made some life-long friendships and expanded my musical background.”

However, Miner loved playing jazz. Unfortunately the chances of being “the next Charlie Parker of Roswell," a town built around little green men and space ships, were slim. “We don't live in an artisan's society in this day and age, so making a living as a musician is more-often-than-not a losing proposition,” he said. “I was one of two jazz guys there.”

It just so happened that local television station KBIM was looking for hometown bands and performers to appear on an album compilation. Miner saw an opportunity—both personally and professionally. "The proceeds were donated to the Cancer Foundation and at the time my Mom had cancer, and subsequently passed away from it. So it was kind of a way to channel my enjoyment of playing toward a good cause—with a personal twist.”

He decided to enter “Southwest Friends Old and New.”

“It was just a recent composition. I thought it came out pretty good, so I entered it."

While the entry stood out as the only jazz performance on the record, the album did not receive any support from local radio. “I did get a spot or two on TV commercials promoting the sale of the album for charity,” he admitted. “I got my 15 minutes of fame on the local TV channel, and I have the album framed on my wall as its my first published work.”

Miner would soon leave southern New Mexico for El Paso, and then, in 1993, find a more appropriate place for his craft, the big city of Albuquerque. “There is much more opportunity here for jazz,” he said. “I did a solo gig for a few years while weaving my way into the fabric of the local music scene.” It was at one of his shows that he would meet guitarist, Ben Martinez. The two were sidemen on a gig, when Martinez approached Miner to join a band he was putting together, the Ben Martinez Project.

BMP, with its traditional jazz, funk, modern jazz, Latin, rumba, urban and polyrhythmic jazz sound, would go on to win four New Mexico Music Award honors, and just returned from playing the Texas Jazz Festival—the band’s thirteenth appearance at the annual event. Miner still performs in the band, and is currently working on his first solo release.
Posted by Lisa Wheeler at 8:46 AM No comments: