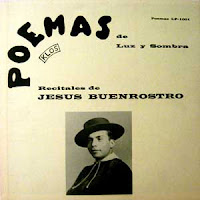 In the late 1950's through the mid 1960's, Albuquerque radio station KQUE dominated the airwaves. In spite of the enormous popularity of Al "Pal Al" Tafoya, and his program "Night Train," rival station KLOS couldn't compete. In 1960, looking to carve out its own niche, Tafoya (who was also the station's program director) switched formats from pop rock to Spanish language.

"In 1962, in an effort to promote the format, and generate income, he (Tafoya) decided to produce an album of Spanish language poetry, read by station's afternoon announcer, Jesus Buenrostro," said Mike Langner who, at 19-years-old, served as "the kid who maintained the equipment," in his first radio job. The recitals were recorded in the station's makeshift production studio, located on the third floor of the Loft Building. The session took two evenings to finish.

"The albums were sold over the air and at Spanish language record stores," Langner said.

However, unable compete in the market, the station went bankrupt, and off the air the following year.

Mike Langner went on to have a successful radio career in the Albuquerque/Santa Fe market (KGGM, KVSM and KDEF). Later he would spend several years as a volunteer at the classical music format KHFM - and go on to be the station's general manager.

Alfonso 'Pal Al' Tafoya went on to radio station KAFE, as program director. He later left New Mexico to pursue a career in California radio. He has since passed away (date unknown).

Guitarist Vincente Saucedo continue to play at his own local bar and restaurant, Vicente’s Dining Rooms (located in the Old Town Plaza), and went on to record an album, Vincente Plays. A stroke in 1996 left him unable to play again. He passed away in 2002.
Posted by Lisa Wheeler at 11:43 AM No comments: