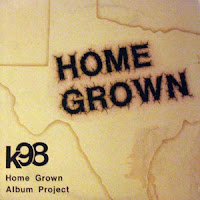 Side Two:
Just Look, Don't Touch - Mother of Pearl
Mamie Mama - Too Smooth
Seasons of Plenty - Lynn Boehmer
Since I Found a New Love - Cobras
The Lord Pulled Up Behind Me When I Had Cheatin' on My Mind - Miles Lefler

Jimmi Lederer needed a new band. After a few years of playing throughout Texas, in different groups (including Zilker Sunday), he decided to put an advertisement up in a local Austin music store, looking for a new gig - when Kevin Wommack called him up. "I think it was the summer of 1979. They were looking for someone to replace their recently departed female vocalist," he said.

Kevin and his brother Keith had formed the aptly-named Wommack Brothers Band, playing gigs at the famed Armadillo World Headquarters, opening for acts including Elvis Costello, The Runaways, Journey, and Edgar Winter. "In fact, they opened for national acts so many times, some people referred to them as The Warmup Brothers."

The new line-up, with Lederer, toured extensively in East Texas, Louisiana, and an occasional trip to Memphis. "We played four or five nights a week, four hours a night - we played more on the road than we did in Austin, as the money was better." Locally, the band picked up gigs at Liberty Lunch, Steamboat, and The Back Room. "We made a living without needing a day job, but Austin was a much cheaper place in which to live then."

In 1980, Austin Top 40 station, KHFI (known as "K98") decided to put together its own version of the successful KGB-San Diego Homegrown records, featuring local bands. The band decided to submit a Lederer-penned tune, "Always a Dancer."

"I had been writing songs and playing with a friend, Kim Hayley, for a few years. When I joined The Wommack Brothers Band, Kim was playing bass with The Stephen Doster Band, and I used to hang out and sit in with them a lot. "Always a Dancer" was written on the road with guitarist, Joe Forlini, just a few weeks after I became a member of the Wommack Brothers Band. The lyrics came from my personal experience - observations of the girls who become followers of bands. In this case, I am referring mainly to strippers, who, while having a legitimate interest in the music, really didn't have much of a clue as to who the boys in the bands really were; thus the line, "She's in love with your guitar."

After the release of the album, the band decided to capitalize on the exposure, and started to submit tapes to major record labels. "In 1981, we pressed, released and distributed a 4-song EP on Twin Song Records, which got a little airplay locally on KLBJ-FM, and a few other small East Texas stations," Lederer said. "One song, "Runaway Heart", was listed in the December 19, 1981 issue of Billboard as a "Recommended" Top Single Pick. Others on the list that week were Genesis, The Jacksons, Diana Ross, and Peter Cetera." Unfortunately, with no national distribution, the song never charted. "We joined the ranks of the 'almost famous'."

The Wommack Brothers Band would go on to break-up the following year when Keith Wommack decided to quit music to become a Christian Science practitioner. "We played one of our last gigs in Grambling, Louisiana - ironically, the club burned down that same night," Lederer said. "I have been in and out of the music business since then - mostly out. The last commercial release on my part was a cassette of ten songs by a band called B-Sharp, released in 1992." Lederer is currently a socialworker for Child Protective Services.
Posted by Lisa Wheeler at 7:54 AM No comments: