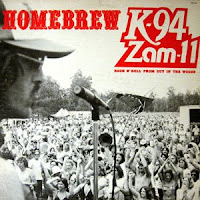 "WMYK 94, Love Broadcasting, from 1000 feet above Earth,
out in the woods, from the 100K watt Dismal Swamp tower."
In 1974 WMYK, or K-94 as it was known, signed on. The station broadcast rock across the Hampton Roads – the Virginia Beach-Norfolk-Newport News area of Virginia and North Carolina.

On any given day the station’s jocks made themselves visible, taking part in any number of remotes, events and contests. The promotions were wildly popular, if not notorious in the community.

“In 1980, or ’81, we gave away $25,000 to the 25th caller who called in when they heard “Another One Bites the Dust,” said Wynn Evers, the station’s 6-midnight jock. “However, when we actually aired the song, we actually locked up the phones surrounding Hampton, Virginia Beach area, knocking out phone service for the mid Atlantic Eastern seaboard.”

“I believe people, as far away as Baltimore, had their phones knocked out – there were no dial tones,” he said. “They [the phone company] kindly informed us that if we pulled that stunt again, that they may pull our telephone service. So when we did the contest again, we had to notify the phone company, telling them when we were going to give away the money, in confidentiality, so they would have personnel on hand, to cover the switchboard.

“The cover was taken at an outdoor concert that benefited MS research,” Evers said. “The photo of the air staff lineup was taken at one of those memory lane photo shops. We thought the photo would keep the theme of the southern rock outlaw sound of the album.” 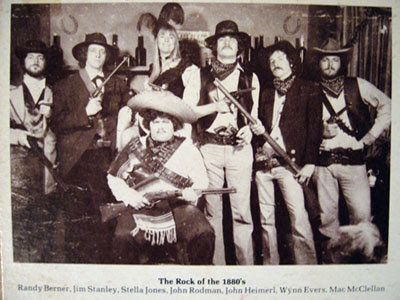 DJs pictured: Randy Berner, Jim Stanley, Stella Jones, John Rodman
John Heimerl, Wynn Evers, and Mac McClellan
But while the station’s shtick was to make themselves visible to their audience, some personalities managed to maintain an illusion of character—namely the wildly popular, Zonar.

“Jim Stanley was our morning man for years,” Evers said. “He came up with a character for the morning show called Zonar.” Based on some of the fans often seen at the station’s outdoor concerts, Zonar was an outrageous, spaced-out, Tommy Chong-styled personality, who instantly took off with listeners.

In reality, the character of Zonar was produced each day prior to the Stanley’s next show. “Jim would pre-record all Zonar drops onto a cart and then he would just interact with Zonar, who was on tape.”

To seal the deal with the listener, Jim Stanley dressed up as Zonar, complete with wig and beard, and appeared at one of the station’s Portsmouth concerts. “We brought Zonar out to emcee. Once people saw him at the concert [about 25,000 people], he was real to the listeners.”

In 1983, WMYK’s run would end, when WNOR and shock jock Henry "The Bull" Del Toro would dominate the market. Sensing a need to reinvent itself, WMYK changed its format to new wave-modern rock, a format that had taken off on the West Coast. “That was not the case in Virginia,” Evers said. “Basically it was the death of that station. East coast wasn’t ready for it.”

After less than a year playing Talking Heads and New Order, the station changed its format again—to urban contemporary, and was known as "K-94 The Rhythm of the City.” After several additional format and call letter changes, the station is now known as WPYA, and is now a “we play anything” Bob format station.

Evers left the station in 1986 for a production director gig at WNOR. He left radio in 1992 and is currently a successful commercial voice talent.

“It was a great place to work. When I went to a couple of other stations, before I got out of radio, it wasn’t the same. Those days of radio are gone.”
Posted by Lisa Wheeler at 6:30 AM

Wynn, or anybody else out there in the know, do you remember when Cox Channel 11 used to play videos in the early 80s with the K-94 commercial with the chick dancing and something about a whole bunch of watts coming out of Moyock, North Carolina? If anybody's got any of that stuff, please please post it on YouTube.

is there any chance the midnight ID using ELO's 'Fire On High' still exists? If so, I'd love a copy of it. I lived in Va Beach (Sandbridge) from '81-'85 and heard it quite a few times. I went on to work in radio myself for 7 years.

I hosted the Video Rock Jams on Cox. Yes my producer Ken Johnson has all the shows on 3/4 tape. We hope to get converted soon and I will talk to him about posting on You Tube

Sorry but I did not save a copy of the Midnight Sign-on using Fire On High. Bill Rogers the voice of the sign on and myself do voice drops for Radiontenna..that's the PBS HD channel in Norfolk..WHRV HD3..you can go to WHRO.ORG and Live stream on your computer 24/7..Radiontenna..we do a version of the sign on at midnight..not the original but close.

thank you! thank you! thank you!
for posting that sign on footage. i grew up in currituck/outerbanks & k-94 was a big part of that great time of my life experience.
it's bittersweet reading those comments & hearing/seeing that clip.
oh yeah, & i was at that concert that was mentioned with zonar emceeing. it was one of the main events @ the portsmouth stadium. molly hatchet, blackfoot, .38 special, & more.
good God i'm getting melancholy.lol
good times... no GREAT times.

I was there in 1974 and 1975, and was the second jock on the station. Cool place, across the railroad track in a doublewide house trailer with two other trailers where Robert Benns and Bill Rogers lived.
One letter. Two numbers...

I remember the Zam-11 van coming to our neighborhood passing out bumper stickers. I tuned in on my little transistor raido and was hooked. Years later when I finally got an FM radio I made the switch to K-94. What a great station! I listened throughout my high school years but being a rocker at heart I just wasn't ready for that modern rock/rhythm of the city stuff. It was sad to see a great station go away. I taped the entire last show on cassettes with all the old personalities doing one last bit, even "smash shannon." Anyone know what happened to that dude?
I will have to clean out my garage to find those tapes and hopefully, they are still playable. I used to stay up just to hear the "fire on high" sign on before going to bed.
Thanks to all who made the great K-94 possible. It was the soundtrack of my young life.
mrglenn66@yahoo.com

Ya'll...here's another country heard from, Randy Berner here, former 2pm-6pm Rock n' Roll DJ on K-94. I was on ZAM from the day it signed on. Then, moved to Moyock, when we began to simulcast the afternoon...this was about '77-'81. We moved to Pittsburgh in '82 to work for the Benns operation here. To James Timebandit...the version of the Sign On that you posted on YouTube is the Jim Stanley version. It had to be remade when we got offices in Norfolk. The original original by Bill Rogers is lost to the ages or is stashed somewhere in Bill Rogers archives. But like Wynn says Bill can be heard doing the same sign on on Radiontenna (WHRO). Gettin' ready for our Reunion, crusin' down memory lane.

I listened to K94 all the time in 1978 and 79.This station rocked hard!
If anyone has any airchecks from this period i would love to do a trade i have lots.
Thanks
wmbunn@msn.com

I worked at K-94 ans ZAM-11 in 1979-80 part time weekends and assistant engineer. John Heimerl and Joe Wetherbee were my mentors. The greatest radio/audio talent in the mid Atlantic region came through that Moyock dirt road including Wynn Evers, Jim Stanley, and Brandon Stacy. Everyone was great to work with and taught me more than I could ever learn in college.

It was my first gig in Hampton Roads radio. Learning to synch with Zeke was a hard lesson. But I wouldn't trade my experiences there for a national talk show slot.

I was in the Coast Guard from 75-79. After being Stationed in Alaska I was sent to Commsta Portsmouth, Va located on the Naval Security Group Activity on Balahack Rd. about 2 miles from the Station in Moyock. The station provided great entertainment to us. Sometimes during the late evenings or around midnight a couple of times some of us stopped by to visit the DJ's. I love the midnight Broadcast Day renewell with E.L.O. "Fire on High" as the music background. In 2006 I was traveling to South Hill, Va for "Bike Virginia" and decided to visit my old command and I also went to the site. It was shutdown. Also Moyock was build up. It just use to be a few houses, a Garage, and the station with it's massive tower. Thanks for the memories.

I have a copy of Homebrew from my days in Hampton Roads. Thinking about converting it over to MP3s and framing it for display it in my office as a reminder of my wilder days! Cheers from Charles Leeuwenburg, Morehead City, NC.

I would love to get a copy of this album or the tracks on another media...

I lived in Williamsburg and attended CNC during the late seventy's and early eighty's. I used to hear Fire on High everyday at noon and still remember how special that was when I hear it today. I had forgotten about Zonar until I read a previous post; I loved going to the Outer Banks.

I was a big fan of k-94 in the early 80's. does anyone have a copy of Zonar's rap that they edited in during Blondie's Rapture song. Man i would love to hear it today. Thankx for the memories.

K-94 used to rock Franklin back in the mid to late 70's. We used to cruise around in my parents 98 Oldsmobile at night jamming to Wynn. The Home Brew album rocked. Saw some of those bands at the "Bluegrass Festival" in Courtland. That was a blast. Snuff used to play some of the Bronco Club Pig Pickin's. Great times and many memories. Thanks to all who had a hand in it.

I've also been looking for a copy of Zonar's rap (Blondie's Rapture). I was surprised many years later when it dawned on me that this was not an official version of the song. IIRC, it was *that* good.

"Your announcer of the ozone!!!"

For the person who requested the 'Fire on High' station ID: