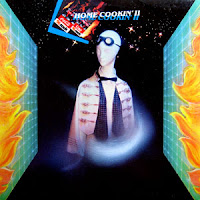 Side One
Storm Inside My Head - Fortnox
Get it To Go - Illusion
Be My Man - Dreamer
Heart of Steel - Billy the Kid
Trip, Fall, Get Up Again - Bert Elliot’s Changes
She’s a Leaver - The Sockets
Side Two
In The Name of Rock and Roll - Metalworks
Earthdogs - Public Enemy
Be Somebody - Frank Furter and the Human Beans
Dancin’ To Your Heartbeat - Buddy Causey and the Handsome White Boys
Three Years Too Late - Heathen Girls
Please Buy This Record - John Diazo and the Duplicators
For those familiar with the famous bands of Georgia, DeKalb County, located just a few Metro stops away from Atlanta, is known as home to the Indigo Girls—but back in early 1980s, before Amy and Emily hit the Top 40, the music scene in the suburb was ripe with local talent, all looking for that one shot of stardom outside the Peach State.

“Clay Hayes and I went to the same high school, Shamrock High School, the same high school as the Indigo Girls,” said Brett Hart. “It was 1977, and I was 16 and Clay was 18. He had a Sears & Roebuck guitar/amp combo and I had a Gilbert copy of a Fender Precision that I had bought and taught myself on to play in the school's jazz ensemble."

After a short stint in the Navy, Hart returned to find Hayes jamming with Mike Hinton, a junior at nearby Redan High School, and bass player named Steve Botsford.

“One night, Clay took me, my bass, and my amp to Mike's house without telling Steve. We started playing together and the room just exploded. Steve had plans to join a band called Rampage, which became our "brother" band. We auditioned singers throughout the summer of 1980 until George Baisch, who graduated from nearby Stone Mountain High School, tried out and was accepted. We practiced throughout the fall and Metalworks debuted at the Christmas dance at Shamrock on December 6, 1980.” 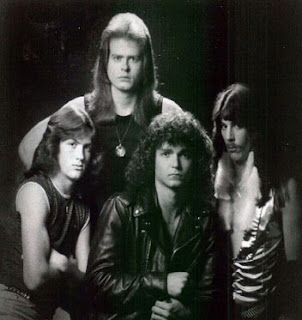 Metalworks from left to right: Mike Hinton, drums and percussion;
Brett Hart, bass and keyboards; George Baisch, lead vocals;
Clay Hayes, lead guitar and vocals
The group honed their act across the Atlanta club scene, at schools, and keg parties. “We also played at an outdoor concert behind Stone Mountain organized by Rampage's former bass player, Lindy Potts, called Stone Mountain Jam II for over 4,000 screaming fans in the summer of 1981.”
That summer, radio station WKLS (96 Rock) announced it was taking entries for the second in its successful Home Cookin’ LP series. The band hooked up with disc jockey Steve Starnes to produce the band’s entry, at Monarch Studios.

The contest allowed each band to send two tracks for consideration. “Steve picked the songs, one from our first demo tape ("Queen for a Day") and one he had heard us play at Green's and liked a lot ("In the Name of Rock and Roll"), for us to record at Monarch Studios,” Hart said.

On October 27, 1981, 96 Rock announced the bands chosen to be a part of Home Cookin’ II. “I was sitting in my living room; Clay and Mike were on their way home from work; I don't know where George was. The DJ went down the list in the same order as they would appear on the album. I tape recorded the announcement. When the DJ said Metalworks, I jumped out of my chair and ran around the room whooping. Clay was the first one to phone me -- we screamed for five minutes and hung up on each other. Steve called and joked, "They did say Metalworks, didn't they?" I played the tape back for him just to be sure, and when the recording said "Metalworks," started screaming again.”

The band’s song, “In The Name of Rock and Roll” had been chosen.

After the release of Home Cookin II, Metalworks kept busy, playing regular gigs throughout Georgia. “We were immediately booked for about a year playing large venues such as the Agora Ballroom, Rumors, the amphitheater at Chastain Park, Georgia Tech, the University of Georgia, West Georgia College, Emory University, and other mainstream concert bars.”

The group also went back to the studio to record its first album—but the band would soon unravel.

“We recorded the other eight songs at Monarch in late summer or early fall of 1982 in preparation to move to Los Angeles. George got heavier into drugs, and we fired him. After George, we couldn't find another acceptable lead singer, so we disbanded about six months after the recording.”

In 1996, just three days before signing a record deal in Los Angeles, Baisch died from a drug overdose.

In 2005, Steve Starnes uncovered the original demo tape, recorded by the band during that 1982 recording session. “He later discovered that Larry Turner, our engineer, had a first generation tape made from the original masters, which had long since been destroyed - so he and Larry digitally remastered that tape on compact disc,” Hart said. The CD Unfinished Business was released by Catapult Records, in June.
The re-release of the band’s winning entry on the Home Cookin’ II LP, "In the Name of Rock and Roll," recently charted on the SoundClick metal charts at #137 (out of over 73,000 metal songs), and on the heavy metal charts at #47 (out of over 32,000 heavy metal songs).

Hart still occasionally picks up his bass, and now runs a Web site dedicated to his former band. “I now work for the State of Georgia in a non-law enforcement professional capacity, work part-time editing and developing a guide for CPA candidates to help them pass the exam, and trying to get Unfinished Business introduced to as many people as possible.”
Posted by Lisa Wheeler at 5:00 AM